Lady Gaga – You and I Sheet Music

Presenting Lady Gaga You and I Sheet Muisc. This is a song by American singer end of her third studio album Born This Way, written and produced by Gaga Robert John “Mutt” Lange. Lady Gaga has performed the song in public for the first time at the White Tie and Tiara Ball, and July 7, Gaga announced that the song would be part of the tracklist of the album Born This Way. 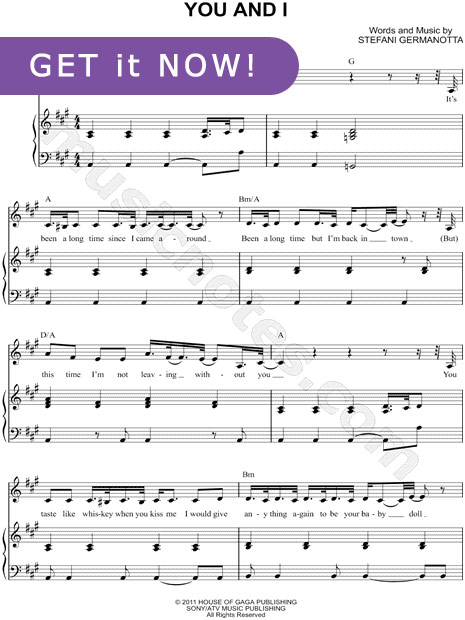 You and I was announced as the new single by Gaga herself on KAMP-FM radio. She announced that the video for You and I would be his 1000th tweet, but pictures and the video leak on YouTube and she is forced to broadcast two days ahead of schedule.

Gaga said that the song is “a little rock and roll, so it probably will not be used as a single”. The song is about the relationship Gaga has had with her boyfriend at the time, Luke Carl. The song was written at her home in New York, on his first piano. The lyrics explain that Gaga tried to find the love she had lost. On May 5, 2011, Gaga performs for the first time the song album version (with electric guitars and backing vocals) on the Oprah Winfrey Show. The song is a tribute to the album “Nebraska” by Bruce Springsteen. Guitarist Brian May of Queen, is also in the song.