Presenting Stronger sheet music by Kelly Clarkson is the fifth studio album by American singer-songwriter Kelly Clarkson, the album was released on October 24, 2011 by RCA Records. 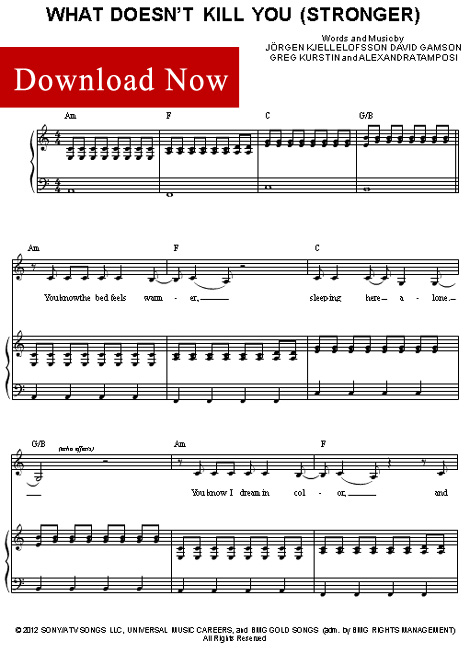 Clarkson began writing new material for the album in November 2009 while on tour and recording completed in February 2011.

The album release was delayed several times. The first single, “Mr. Know It All” was released in a live broadcast on August 30, 2011 and is available as a digital download from September 5, 2011. Peaked at number # 10 in the U.S. Hot 100 and was successful in most of the world. The second single released was “Stronger (What Does not Kill You)” which peaked at number # 1 on the Hot 100 and was a top 10 hit worldwide.

Stronger is a concept album where most of the songs deal with issues in this case, about relationships, the strength of loving yourself and contempt are some of the issues presented on the disc. Critics said the singer: Back stronger than ever and this is easily his best album

Sales of the Tune