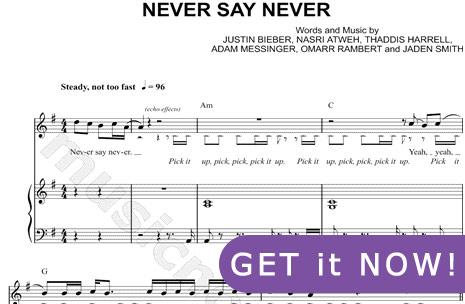 Released on February 11, 2011 in the United States on 24 February of that year in Argentina and 15 April of that year in Spain. Directed by John Chu. Distributed by Paramount Pictures in 3D.

Documentary that follows the Canadian cross singer, Justin Bieber with images from his worldwide hit My World Tour, held in 2010. It also includes home videos recorded by his mother as a child. Also participate in small parties other famous singers like Miley Cyrus, Sean Kingston, Jaden Smith, among others.

Premiere of the documentary

According to the Rotten Tomatoes website received 65% positive feedback, leading to the following conclusion: “As a documentary of the tour is fairly uninspired, but seen in 3D to create a culture phenomenon, Never Say Never is enough entertaining. ” Scott Bowles wrote, “even if you’re not too fan, Justin Bieber: Never Say Never is not as horrible as you might expect … as loud as Transformers and as gay as a Teletubby” … Rolling Stone reported that “a 3D concert movie, to the delight of the timid girl with braces 13 years in all of us after a while, the film begins to feel like a lethal injection of gum,” according to the website Metacritic received mixed reviews, with 52%, based on 22 reviews, of which 8 are positive.