Presenting Britney Spears I Want to Go Sheet Music. This is a song by American pop singer from her seventh studio album, Femme Fatale. It was written by Max Martin and Shellback and produced. 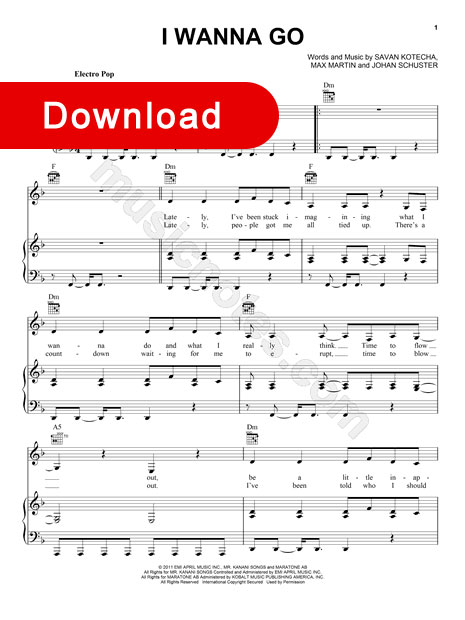 I Want to Go has Spears’ twelfth Top 10 hit in the U.S. Billboard Hot 100 and reached the first of their songs an audience of over 100 million in all U.S. radio formats. In the thirteenth year of her career thus it is Spears’ most successful radio hit.

Background of the song

I Wanna to Go was written by Shell Back, Max Martin and Savan Kotecha and produced by Martin and Shellback. On 22 February 2011 Spears on Twitter posted a 29-second excerpt of the song and named Martin as “astonishing”. In an interview with Rolling Stone magazine in March 2011, Spears said that she liked the song and constantly praised Martin for his incredible melodies. “There is no one with whom I prefer to work together, as with Martin,” Kotecha said on 3 May 2011, that he wrote the song about one and a half years. Spears’ fans were able to vote which song will be released as the third single from her album. On 11 May 2011, was itself known via Twitter that their fans would have opted for I Want to Go. Two days later, I Want to Go by Spears’ record label Jive Records officially confirmed as the third single from the album.